- June 06, 2019
Occasionally, I come across a brewery with a unique hands-on opportunity. North High Brewing Co in my hometown of Columbus, Ohio, USA is one such brewery. North High opened six and a half years ago as a small, street-front brewery and taproom on High Street, the city's primary North-South thoroughfare. It's centrally located between the Ohio State University campus and the Short North Arts District, with lots of opportunity for drive-by and walk-in customers. It wasn't long before North High outgrew their original space and expanded to a much larger production facility not far away. The original taproom remains a hub for craft beer drinkers, and the original brew house is a "brew your own" facility.

Not yet having hands-on brewing experience, I decided that North High's program would be the perfect way for me to get my feet wet with zero investment in home brewing equipment and supplies. I gathered my stepmom Kim and we set out to the brewery on a recent Sunday afternoon to brew our very own beer. We were greeted by James Clifford, the brewer who leads the brew-your-own program. After some quick introductions, we discussed beer styles. North High has a recipe book offering a diverse selection of brews. Knowing that we would be producing about 6 cases of beer, I wanted to pick a style that would have broad appeal. We settled on a modified IPA recipe that would be similar to a New England style: juicy and not too bitter.

When James schedules individuals and groups to brew their own, he can oversee several kettles at once by staggering the brewing times of the groups. On our brew day, there were two other groups present, including one birthday party. Many of the brew-your-own participants choose this as a fun, social or team-building activity and are not interested in being 100% hands-on. Kim and I were different - we wanted to do as much as we could. Kim had some previous experience assisting my dad Steve years ago when he discovered home brewing, but I had no practical experience, and I wanted some.

While we waited for James to get our supplies ready, Kim and I enjoyed some delicious beverages from the bar. While I'm primarily a beer drinker, Kim is a vodka drinker. Neither of us was disappointed. Kim tried several vodkas from local craft distilleries, and I sampled some of the North High beers that I hadn't tried before, including Apple Brandy Life, a sparkling ale. Apparently I was too busy working and taking pictures to keep track of the other beers I tried, but I know that in the past I've enjoyed their Milk Stout and Mister Fahrenheit, the New England IPA that my beer would be based on.

The brew-your-own program at North High offers a simplified brewing process, designed perhaps to save time and cost. Rather than making our own mash, we started with two liquid malt extracts (Pale and Pilsener) that went straight into the kettle. For good measure, James did have us mill some caramel malt, load the grist into a mesh sleeve, and dip it into the kettle to impart some of its flavor and starch. But because we didn't create a traditional mash, there was no need for lautering, or separating liquid wort from spent grain. Instead, our malt extracts dissolved into the boil.


And then the several hour boiling process took place. We added various hop pellets at specified times to contribute the classic bitterness expected in an IPA, as well as some citrusy flavors. Our hops were Summit, Chinook, Cascade, Centennial and Citra. At the end of the boil we were left with a wort that had just a little bit of solid matter from the spent hop pellets and proteins. James managed the filtering and cooling of our wort into a blue, plastic fermenting vessel where it would live for a few weeks. House yeast was added quickly, so as to not let much air into the vessel. And that was it for the brewing day.

About a week later, I returned to North High to add the dry hops to my beer under James' supervision. Typically, he manages this step for the batches that need to be dry-hopped, but I wanted to be part of it. I measured the hops, wrapped them in the mesh, and added them to the fermenting vessel quickly. The dry hops were Summit, Chinook, Centennial and Citra.

And while I was there, I tried the newly released North High AF American IPA, which I thought was well-balanced and refreshing. I enjoyed sitting at the bar and talking to some of the happy hour patrons. The building housing North High's taproom was an old-time car dealership, as well as other businesses over the years. There is a lot of character to be found in the woodwork, the showroom floor (you can see where a a turntable used to display cars), and the wall of mailbox cubbies. The atmosphere feels very 1930s/1940s.

Three and a half weeks after brewing, I returned to North High to can my beer. Brew-your-own participants can choose bottles or cans as their packaging. I selected cans because they're lighter, stack-able, air-tight and block all light from spoiling the beer. Before my canning day, I provided James with my label artwork. The brewery is required by law to label all beer that leaves the premises, but part of the label was ours to design (shout-out to my logo and beer label designer Ted Townsend). Before canning, I observed James transfer my beer from its fermenter into a keg, and then add the CO2. For canning, he hooked up a wand to the keg and the CO2 tank. The beer was fed from inside the cooler through a hose to the wand at a workstation outside the cooler.

James demonstrated the proper techniques for adding first CO2 and then beer to each can, and then sealing the can. Little did I know how much time it would take to can six cases of beer by myself. Every single can had to be filled, sealed and labeled by hand. I spent a few hours at the brewery that evening, but it was worthwhile. First, I got to taste a new-to-me North High brew, Grapefruit Walleye IPA (does not contain fish), which was pretty good. And then I got to taste my own beer, which was indeed a very drinkable IPA that gave me some of the juiciness I was expecting, without too much bitterness. I also got to chat with Gavin Meyers, one of the brewery's founders. I told him about my brew-your-own experience and he also tried my beer. 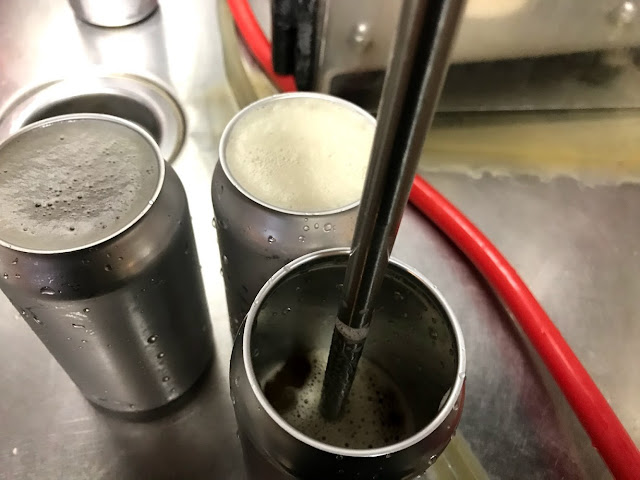 I highly recommend going to North High if you want to try your hand at brewing, and it certainly would make a fun team-building experience for a small group. You should know that this is a streamlined brewing process, and you won't be turned loose to do just anything that you want. There are recipes, controls and supervision in place, but these things ensure that you leave with six cases of good beer that you'll want to drink. James is willing to work with you to help with recipe selection, and explain as much about the brewing process as you want to learn.

Now, what to do with my six cases of The Brewery Log 2019 India Pale Ale? I think I'll plan a little can release party and invite friends and neighbors. The weather is just about right to have a little outdoor IPA tasting party one evening. I'll distribute a few six packs to select friends and family members too. And...I'll probably be drinking this IPA for a little while. Good thing it's tasty!

The North High taproom is open daily. In addition to beer and spirits, you'll find occasional food trucks, and there are many neighborhood restaurants where you can grab take-out to eat in the taproom. The brew-your-own program operates every day except Mondays and Wednesdays, and you can schedule your session online. Costs vary by beer style, but you can expect to spend about $300 total for brewing and packaging 6 cases to take home. The North High production facility is closed to the public except for special events, such as their annual anniversary party in December. Check out the brewery at northhighbrewing.com or follow them on Facebook, Instagram or Twitter.
brewery brewing columbus northhigh ohio usa
Location: 1288 N High St, Columbus, OH 43201, USA

Popular posts from this blog

Dayton, Ohio, USA has some breweries with unusual concepts. My next featured brewery is Fifth Street Brewpub , which operates with a co-op model. Customers do not need to join the co-op, but if they do, they become member-owners with a share of the business for only $125. My friend Shelly and I don't live in Dayton, so we chose not to join, but we did enjoy our visit to the brewery. ﻿ Fifth Street Brewpub (the smaller brew house is on the left) ﻿ You couldn't fit many kegs in here, but it must be great for zipping around town Atmosphere Driving up to Fifth Street, the brewery is easy to find. It's a set of two green buildings on a street corner in the St. Anne's Hill neighborhood. The main building might have been a house or a corner store when it was new; it contains the bar, the dining room and the kitchen. The smaller building is the brewhouse, and in between the two buildings is a beer garden that would have been a wonderful setting for sipping beer h
Read more

Craft Breweries in and around Washington DC, USA

I lived in the Washington DC area for 18 years and I was certainly a fan of craft beer during that time. But it wasn't until after I left our Nation's Capital that I truly started honing my skills and ramping up my visits to as many breweries as possible. I still return to the DC area on occasion, so I've had a chance to experience several of the local breweries with a fresh palate. I compiled the following list of breweries in Washington DC and surrounding communities in Maryland and Virginia. It is by no means comprehensive. I have more tasting to do, but it's my hope this will give you a great start. District of Columbia Atlas Brew Works Atlas Brew Works is 100% solar powered, so you can thank the sun for the tasty beer (thank the brewers too). If that isn't cool enough, the draught list is creative, with something for everyone, and you may recognize some of the popular brews because they distribute regionally. Atlas is a production brewery and a taproom; t
Read more